Even though Jack is now considered healthy with his prong-less face and upward moving weight chart, we are still trying to catch up with where he should be. Jack has Physiotherapy every 3 weeks or so because his body is only the equivalent of 7.5 months old even though he was born 10 months ago.

We’ve had ongoing issues with his mobility since he’s come home and started to get more active. It appears, however, that it isn’t that he cannot do something but rather that he is suborn and opinionated and doesn’t want to! It was like this for the tiresome task of getting him to lift his head up whilst having tummy time. It took months for him to do it. But only because he is lazy and doesn’t want to. We are now having the same issue with sitting unassisted. If you put him in his car seat, bumbo or Fisher Price seat then he’ll happily sit and play if you give him a toy. If you try and get him to sit on the floor, he turns into a plank of wood and pretends he has no joints to bend!

There he with with Kathryn the Physio showing off how strong his little body is standing! This is what he doesn’t when you try and sit him down! A lot of core strength is needed to stand up like that and turn round like in the picture so I know he could sit if he wanted to, he’d just need to learn the right kind of balance. But he won’t. He’s such a funny boy!

We are also trying to get him to stay on his tummy and play with toys in that position, reaching out in front for the toy. His reaction to this is to show off his rolling! He curls hi legs under and flips over immediately! 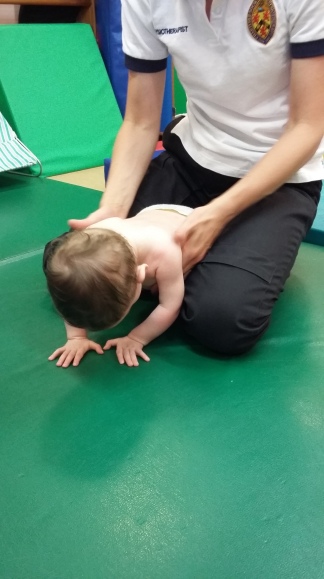 When he kept doing that continuously, we tried using this to our advantage and held him up in his curled position, hoping he would attempt to crawl. He couldn’t but we tried several moves that would hopefully get him more interested in crawling and crouching.

We have some moves to practise at home which I have been doing as much as possible and have been trying to make it a game. The Baby Yoga group has gotten a little challenging too as a lot of the things require the baby to sit in front of you and do arm movements and it’s slightly difficult when the baby in question is determined to push up into standing. Or just wants to kick his legs with as much force as possible.

He is still pretty amazing despite the physical delays. His hand-eye coordination is coming along brilliantly and he can pass things from one hand to another, reach for what he wants and loves to bite on a spoon. He is also babbling a lot more and getting more sounds. When he is upset he says Mamamamamama, whether he intends to it to be that or not! I like to think it’s because he needs a cuddle from his Mummy.

Sign the petition to extend maternity leave from Premmie Mummies! The Smallest Things

To donate to the Royal Derby Hospital NICU charity! Friends of the Baby Unit FOBU