People say to me that I must be very strong for how I handled the 89 days Jack spent in the NICU before we brought him home. I ask these people – what would you have done? This is your baby and so you attend every day for 10+ hours a day because that is what being a Mummy is. It is sitting by your child’s bedside if they are poorly. It is being so ridiculously excited to see them every day. That’s how you do it.

NICU life is hard. Everything is worked around a strict schedule of feeds and nappy changes and medications. Daily heel prick tests to check bloods and anxiously waiting the 30 seconds for the results. Not being able to see their face properly because of the breathing masks of various different machines they progress to and you get excited when they change from one to another because for 20 seconds you get to see the whole face bare. You get excited about weigh day twice a week and wonder how much milk that means they now have per feed – you start at half a millilitre every two hours and build up. I got excited about 5ml, 10ml, 15ml, 20ml. He was discharged on 90ml every 4 hours! You drag the electric pump round to the incubator because you don’t want to waste 20 minutes sitting in the expressing room with a magazine instead of staring at the tiny baby. NICU life is all dreading every time your phone rings when you’ve gone home to shower or sleep. You think “Oh god what if I get there and they have bad news” and then you stop thinking that because it is physically painful. Going back for one last look even though it’s past half 10 at night and he’s fast asleep.

I was allowed by first cuddle with Jack when he was a week old for 1 hour once that day. The picture is the featured image for this post above. I wasn’t allowed to before that because of the lines of medication going into his body and because of the ventilator. Our first cuddle was skin to skin just as I wanted. he settle instantly and I cried. We snuggled and bonded and then it was time to put him back in the incubator. Feeds of breast milk through his tube every two hours with a nappy change and face clean beforehand.

It was really exciting to come in one day and be told that he was allowed to wear an outfit and I skipped off to their drawer of tiny clothes to choose a blue suit the size of a pocket tissue. I still have it in a box upstairs with his c-papp hat, ECG pads and drip splint. I waited looking at the clock for the times when I could change his nappy and give his face a wipe before each feed. I loved nappy changes and still do. A nappy change for me represents the first proper Mum thing I did after he was born other than producing milk.

Another big milestone was arriving in the morning when he was 25 days old and the nurse saying that he was being switched from an incubator to a cot and that we can give him a bath in between the change! A cot meant I could take him out and cuddle him whenever I liked. Suddenly I felt more like a proper Mummy. Here I was bathing my boy and taking him in and out of the cot when I liked. Also that day he went past the 3lb mark in weight. 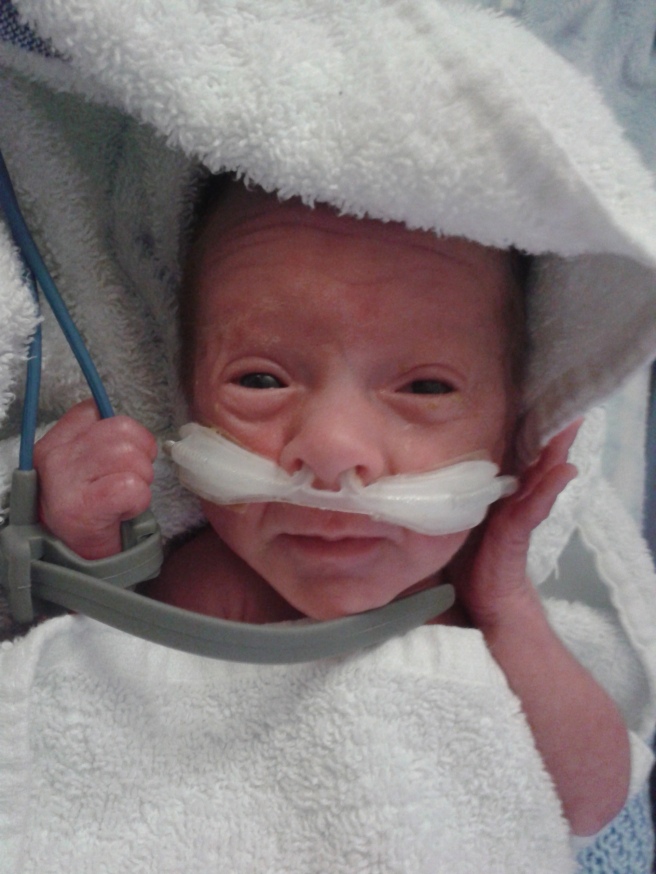 There he is after his first bath. The prongs in his nose are for High Flow which lets him breath by himself with slight support which he progressed to from c-papp. Not long after that he was transferred from Intensive Care to High Dependancy – progress and a step forward towards home! Very exciting!

Special holidays aren’t much different from normal days in the NICU apart from maybe 10 minutes. Christmas was the same routine as always but Santa came round in the morning with a lovely teddy for Jack and some goodies for us. We did pop round to Mums at about 5pm for Christmas dinner but it felt so wrong to be celebrating without Jack. We stayed at the hospital on New Year’s Eve too. We are a family of three and I refused to ring in midnight otherwise. The nurses even passed round non-alcoholic fizz for us to drink at midnight. We were the only parents on the unit that stayed which surprised me as I though other Mums and Dads would stay too if that didn’t have any other kids to get home for.

That brings me to something else the Nurses said. They said that I should consider having a day off or even a morning off. My question was why should I? I am his Mummy and I would’t be having a day off apart from my baby if everything was normal and I’d carried him to term. So why should I just because he’s still in the hospital. I’m proud to say I never missed a day or evening for his entire stay. I never even considered it.

The New Year was exciting because January saw Jack starting to drink milk rather than have it through a tube. I had been trying to teach him to breastfeed since 33 weeks gestations and tried for weeks and weeks but he just never managed it. I felt like a failure and started to resent having to pump and bottle feed as two separate tasks rather than feed him directly from the breast. This was another thing that my body letting us down had caused. So we tried him with a bottle and he downed 50ml in one session. Success! We carried on with bottle feeding from then on and gradually increased how many feeds were given by bottle compared to how many by tube.

The biggest hiccup we had in the NICU was the morning of 18th January 2016. He’d had his 8 week jabs a few days before and if had given him a cold. Not major you would think, babies get colds all the time. OH NO. For a premmie with lung issues it is MAJOR. He started to snuffle and his oxygen requirement went up. He was working too hard to breathe and keep his saturations up. His chest recession worsened. We got a phone call at 2am that morning to tell us that Jack was being transferred back to Intensive Care and being put back on c-papp. His oxygen requirement all of a sudden had gone up from 0.3 litres to 6 litres. I sobbed for the rest of the night. I begged Andrew to let me go to Jack there and then but he said no I needed to try and sleep. I could not sleep. I could not think of anything else. He finally gave in at about 7am and he let me go. My mum came and sat with me next to Jack’s cot and I cried on and off, especially when Jack started to get upset with the c-papp mask and started clawing at it to get it off. After 12 hours they moved him back on to High Flow but it still took another week to get his oxygen back down to what it was before. It was one of the worst moments when I answered that phone at 2am and heard them say Hello its the NICU because you fear the worst. Was I going to lose him after everything we’d been through? Because as I explained before – we are a package deal. I can’t live without him. We were lucky and he eventually recovered but I annoy forget that time when I thought the worst.

Eventually we moved to the Nursery when is almost the last stage. Here it was decided that Jack would be coming home on oxygen prongs at 0.2 litres and we built him up to full bottle feeds and his feeding tube was gone. We realised that he did not gain as much weight on my milk as he should once the fortifiers were stopped so it was agreed that alternating breast milk and formula every other feed was best. Once we were in the nursery his monitoring was reduced down to salutations and heart rate only which meant we could take him for walks round the hospital in the pram. This was wonderful. From then on I didn’t have to leave his bedside to eat my lunch. I could take him with me to the restaurant or Costa for lunch. Another thing that made me feel like a proper Mum. It finally felt like I knew him better than the Nurses.

The last stage of NICU is staying in the flats or “Rooming in” overnight for a couple of days before discharge so you get used to caring for your baby overnight without help. The only time you see the nurses is when they get the breast milk out of the fridge for you or on the last day when the baby has a hearing test. Those three days and nights in the flat were blissful. I could wake up in the night and he was in the cot right next to me. I could hardly believe that after all this time I actually get to keep him and he’s mine. They’re handing him over to me! We cuddled in bed and watched telly and played tickles. Andrew came to visit as did my parents and my sister. 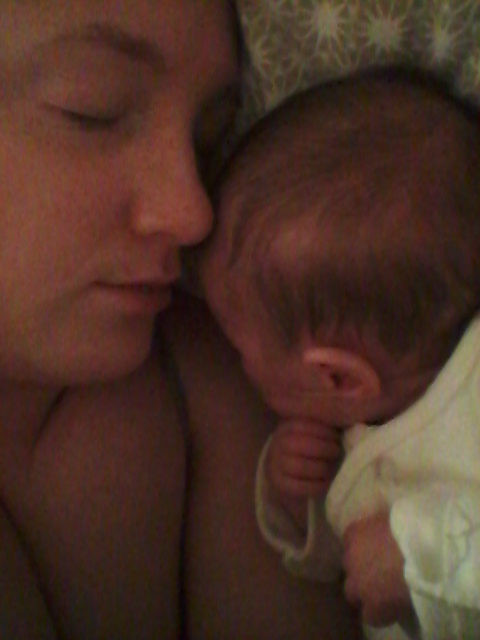 Jack came home on Valentine’s Day. He looked tiny in his car seat but he was finally what I would call normal baby size. His final NICU weigh in was 7 lb 3 oz. Not bad when you think where he started. When Andrew, Jack and I had packed up all our things we walked round the unit for the last time. We’d called it home for 12 and a half weeks and it felt weird knowing that we weren’t going to be seeing these wonderful people everyday. The nurses hugged me. I cried. I can’t list off all their names because there were so many that looked after Jack during his stay. And then we walked out of the unit clutching Jack in his car seat. He was finally ours.